“In the Q & A with the director and the audience afterwards, Boero said he was trying to portray the peacefulness and quiet of the rural Uruguayan countryside and to show the kind of life his grandmother had grown up with. He also revealed that when he was trying to pitch his idea of a documentary about his grandmother he was asked ”Well who is she? Has she done anything important?” His answer was, “She is just my grandmother, but her story is worth telling”.”

The Visions du Réel film festival in Nyon finishes today the 27th April with a prize giving ceremony at 19:30 at the Théatre de Marens in Nyon. The ceremony will then be followed by the screening of the film ”Vivan las Antipodas!” featuring the landscapes and people of Argentina, Siberia, Patagonia, Shanghai and Botswana.

This year as in previous years, it has been another good festival for those who love documentary film. There have been some real gems of films on offer. Some of these were big budget films from experienced film makers with a cast and crew of many; others were just short films shot on a tight budget from directors at the start of their career.  Both Trish Thalman and Suzy Nelson-Pollard have seen and been very impressed by many of these big films, and reviewed them in previous posts. Note: Trish’s latest review of “Nanook “will be shortly be posted on this site.
This year the Living in Nyon editor chose to view the smaller, quieter contemplative films, those that didn’t necesarily come with a message for the viewer,  but were more of an observation on communities or individual people around the world. There were many of these kind of films on the programme, and many of them excellent.  However, heavy editing was needed for quie a few films – some were simply too long, or with too many close up and lingering shots of faces or landscapes.
Yet in some films the lingering on scenes was appropriate and helped to paint a picture of the person or their surroundings. Such was the case of the film ”El Olor de Aquel Lugar” by director Andrés Boero.  In the Q & A with the director and the audience afterwards, Boero said he was trying to portray the peacefulness and quiet of the rural Uruguayan countryside and to show the kind of life his grandmother had grown up with. He also revealed that when he was trying to pitch his idea of  a documentary about his grandmother he was asked  ”Well who is she? Has she done anything important?”  His answer was, “She is just my grandmother, but her story is worth telling”. 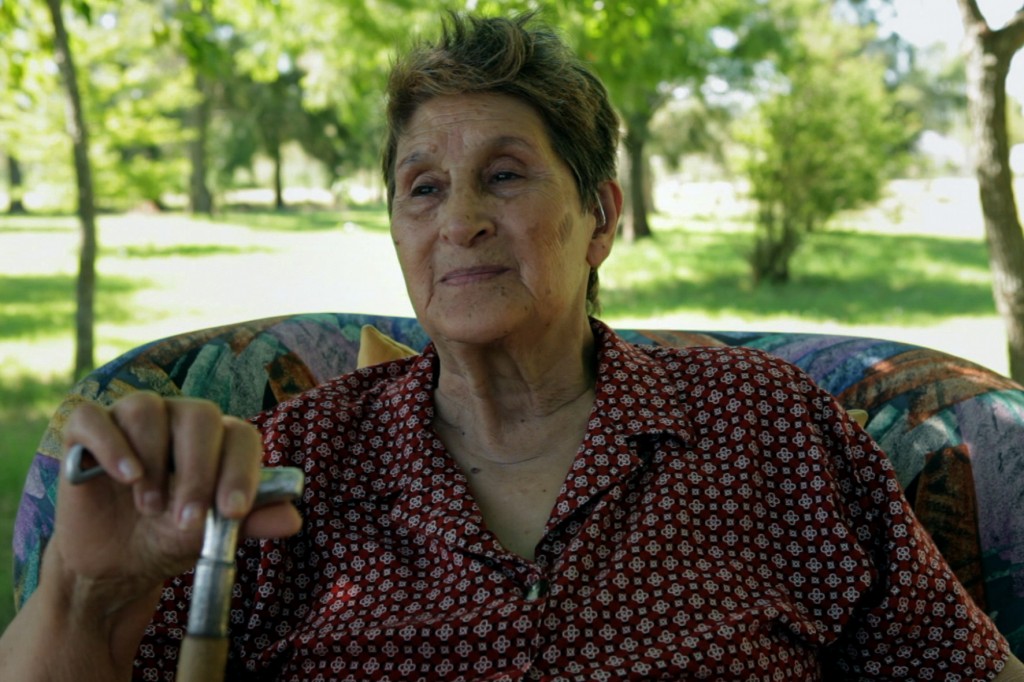 Photo above: courtesy Visions  du Réel from  the film “El Olor de Aquel Lugar”
The film that followed this screening, “Work Hard, Play Hard” by Marcel Wyss about different individuals living in Switzerland, one a tight rope artist whose long term cocaine use had brought him close to death and another, a young man, a party animal who tried to justfy his drug taking to get him through pressured work days was a complete contrast and it was clever programming on the part of Visions du Réel. 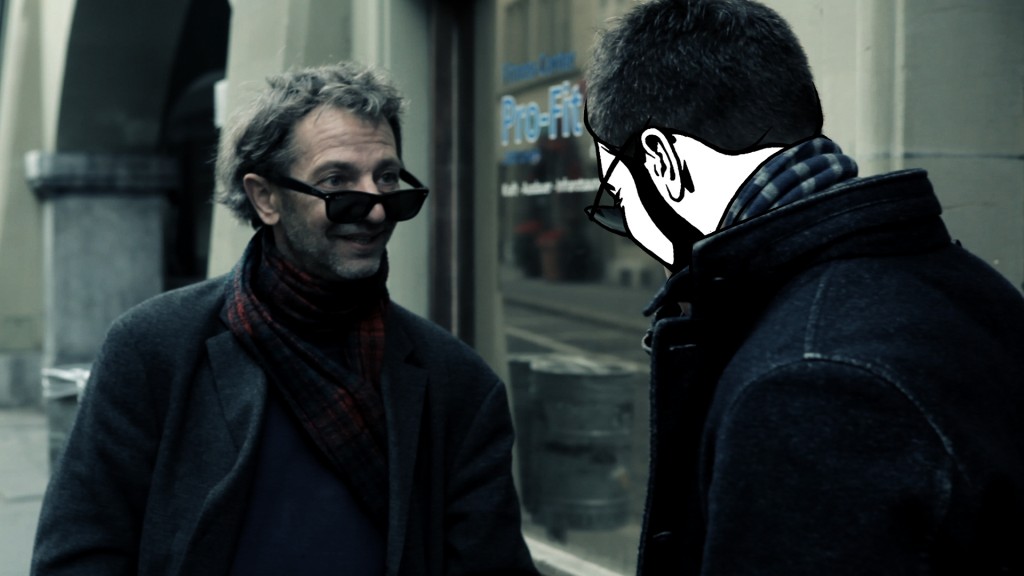 There were some other interesting portraits revealed in films such as ”Checkpoint”.  This film was about policemen housed in makeshift huts inspecting vehicles entering the centre of Kabul. The men recruited in different parts of the country did not really know why they were there and Hamed Alizadeh recorded the absurd quality of the daily lives of these men. Whereas the young woman in the following film ”Szukajac Soni” knew exactly what she was doing as she had chosen to devote herself to be a nun in a Russian Orthodox monastery.
There were some lighter films too on the agenda this year (though perhaps not enough) “Sniegs” was indeed, as the VDR programme described: “Ski madness in a mountainless country”.  This was an amusing surreal portrait of a people in Latvia determined to satisfy their craving to ski.  The film “La Vierge, Les Coptes et Mois” was also an amusing part documentary/part staged film by Namir Abdel Messeh. This film maker travelled to his native Egypt from Paris to make a film about the miraculous appearances of the Blessed Virgin Mary among the Coptic Christian Community. His investigation provided an excuse to visit his family, in the countryside and to involve the whole family in a fantastic celebration.
There were many other films definitely worthy of a mention, particularly for the super photography in the two films shown last night at the Capitole Cinema “Ved Havet” about a small fishing village in the North of Denmark  and ”Le Gosse ” featuring a French boy living in rural France on the threshold of becoming an adult. 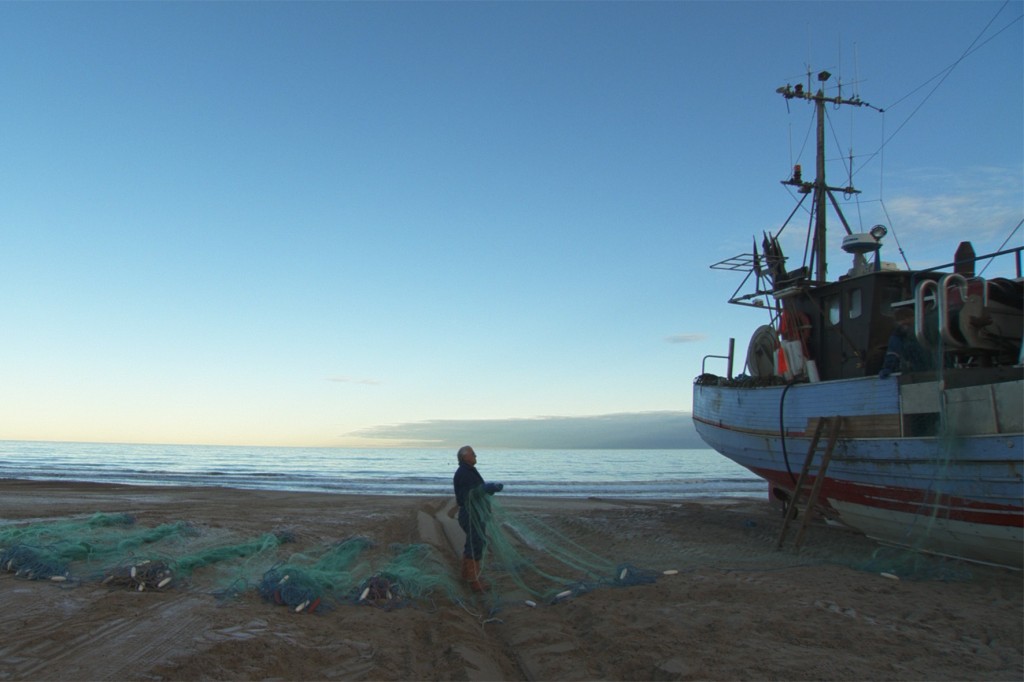 Photo above: courtesy Visions du Réel  from  the film “Ved Havet”
Both Trish and Suzy have come up with their list of favourite films at this festival, it will be interesting to see if any of these are chosen as winners at the prize giving ceremony tonight. Living in Nyon will be tweeting the results as they are revealed. If you are not following the Living in Nyon tweets (see Julius Caesar icon at the bottom of the this site to follow us) then just check this site out during the course of the evening.
Trish’s top six films
1. Forbidden Voices
2. Tahrir
3. Chronique d’un mort oubilee
4. Skinhead Attitude
5. Nanook of the North
6. Tropicalia
and Suzy’s favourite films
1. Forbidden Voices
2. Reunion
3. Capitaine Thomas Sankara
4.  Nés derrière les pierres
The Editor’s  favourite films
1. “Forbidden Voices”
2. “A Home Far Away” (for its local interest)
3. “Ved Havet”